The first time Empty Ensemble’s Greg Bueno encountered Indonesian gamelan music was the score for the animated film Akira. Composed by Yamashiro Shouji, the Akira score drew upon Indonesian music, Buddhist chant and Japanese theatrical tradition to conjure a musical landscape as nightmarish as the film’s dystopian plot. It’s an influence that would loom large as Greg studied music at the University of Hawai`i at Manoa, where he would attend many gamelan concerts.

The work of Lou Harrison and another Japanese film composer, Kawai Kenji, would reinforce this influence till one day, he bought a Balinese sample library from Native Instruments on a whim.

This first single as Empty Ensemble is the first piece by Greg to use that library. The untitled work — 無題平成23六月五日 translates to “Untitled, 2010-06-05” — brings together Balinese gamelan, Japanese percussion and Western strings. It’s a work that can exist only in electronic form given the difficulties resolving the intonations of eastern and western instruments.

Greg plans to expand the ideas explored in this single to a longer work. 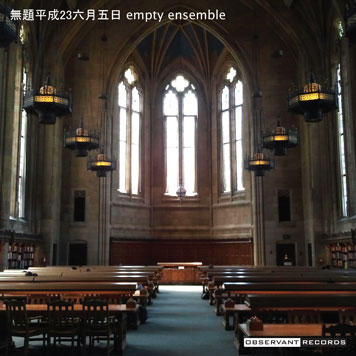